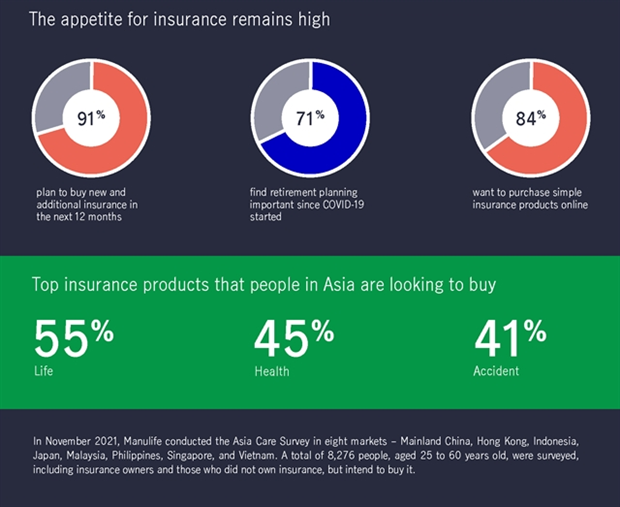 
HCM
City (VNS/VNA) – Two years after the COVID-19 outbreak began in Vietnam,
people believe the end is in sight and they are in good shape healthwise, but
concerns around personal finances remain, particularly among single women,
according to new research from Manulife.

Manulife
conducted the third Asia Care Survey, and more than two thirds (69 percent)
said it would be gone within a year and 77 percent expected restrictions to be
lifted within that timeframe.

Vietnamese
had the most optimistic outlook in the region, including about the time it will
take for the economy to recover with just a quarter (26 percent) fearing it
would take a long time, the lowest in the region.

The
survey was done just as the Omicron variant was starting to spread.

Only
19 percent of single women had savings on hand to last more than a year, well
below the 33 percent national average. It also found that three quarters (75 percent)
of single women were struggling to cope with COVID.

“Vietnamese,
especially single women, have clearly experienced challenges during the
pandemic, but many have adapted and taken control by actively managing their
own finances,” Sang Lee, CEO of Manulife Vietnam, said.

“What
is also good is that they are taking more care of their own health and
protection. That includes insurance.”

Despite
low insurance penetration rates in Vietnam, of those surveyed, 72 percent had
insurance, the most popular being health (47 percent), life (42 percent) and
accident (38 percent).

Remarkably,
91 percent said they plan to buy insurance in the next 12 months, with life (55
percent), health (45 percent) and accident (41 percent) again at the top of the
list.

Addressing
the growing demand for health protection and the rising costs of critical
illness and medical care in the new normal, Manulife Vietnam recently launched
a new generation of supplementary insurance products.

The
critical illness plus rider and medicash plus rider deliver pioneering
solutions in the market with features like extending entry age for both riders
up to 69 years as protection benefits for up to 85.

In
addition, the safety net benefit pays out claims for customers based on certain
criteria for treatment or surgery without having to meet the disease
definition./.