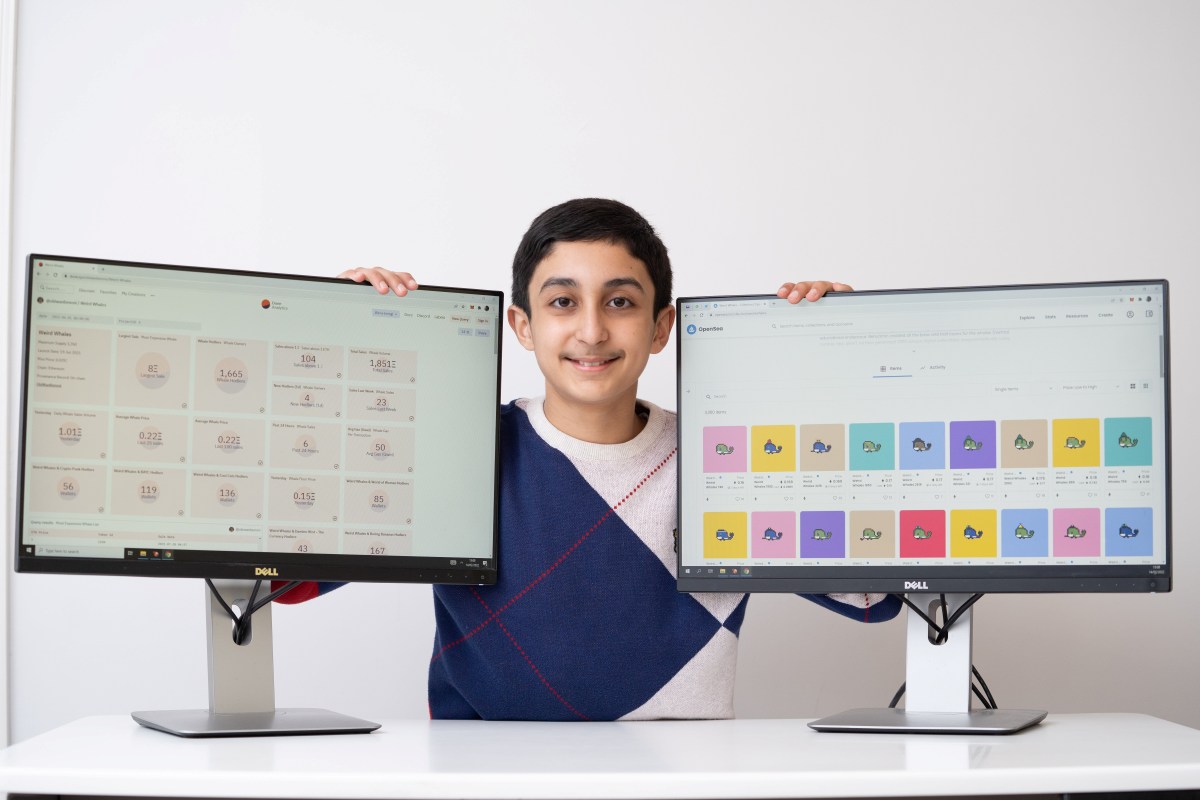 A TEEN crypto expert has made more than three million pounds from trading NFTs and bitcoin.

Benyamin Ahmed learned to code from his dad when he was just five-year-old and was instantly hooked.

When the bitcoin started rolling in last year, the 12-year-old released his whale-themed collection of NFTs – one-of-a-kind digital artworks which can be bought and sold.

His first launch of colourful pixelated whales sold out in hours and netted him £110,000 – a fortune which, combined with his other ventures, has risen to £750,000 in a matter of months.

The schoolboy doesn’t have a bank account though, and hasn’t withdrawn a pound.

All of his fortune is a cryptocurrency called Ethereum, which some argue could become worthless before investors even have time to withdraw.

But Benyamin thinks it’s the future of currency and he doesn’t mind leaving his fortune there for now because he said he is only in the game to build his skills and experience.

So far, his collection of NFTs has traded for a total more than three million pounds, which continues to rise as they become more and more popular.

Benyamin, from Pinner, Greater London, said: “My friends at school know what I do and they have congratulated me. Although I don’t think everyone really understands it!

Speaking of his passion which has now made him a millionaire, the teenager said he sees a “bright future” in the world of crypto and NFTs.

What is NFT art?

NFTs, or non-fungible tokens are unique digital assets which are bought and sold online in cryptocurrency.

They can be anything from artworks to collectible cards and GIFs and no two are identical – so it is possible to trace back exactly where they came from so you know it’s an original.

Buyers have shelled out thousands, or even millions in the process – in the hopes they will one day be worth even more.

However, buying an NFT, like any collectable, is a risky bet on the value going up.

If there is no demand for the NFT you buy then you could end up paying a large amount for something that declines in value or that you cannot sell.

He said: “I think with every industry, the digital versions of things always perform the best.

“With digital art, it has a lot more utility and certification – I can just hop online and see where anything came from.”

NFTs have become increasingly popular in recent years and interest in cryptocurrencies such as Bitcoin, Ethereum, Dogecoin and Ripple has soared this year.

But while adults struggle to understand their value, clever Benyamin jumped on the trend early.

He released his own series of NFTs called Weird Whales in July, 2021 after buying and selling a few.

It makes me happy to see lots of people are learning about NFTs because of me.

The 3,350 NFTs featuring pixelated whales were initially sold for $60 a piece but demand quickly rose so did the price – with some of the collection selling for as much as $20,000.

He gets commission – like royalties – every time they are re-sold and he’s also made income from trading other peoples’ NFTs, and an increase in the value of Ethereum.

His dad Imran said: “For Benyamin, it was never really about the money, it was about gaining knowledge – but of course the money is a bonus.

“I always wanted my children to find something you enjoy doing and invest as much time in it as you can while you’re young.”

Brainy Benyamin plans to eventually convert his money from crypto to pounds and start his own business.