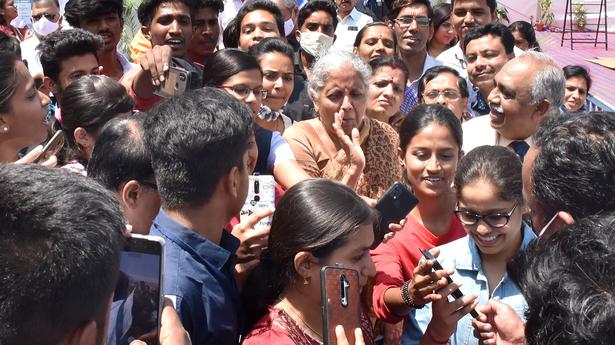 Ms. Sitharaman, who was in Mysuru on Sunday to unveil the foundation stone for the Cosmology Education and Research Training Centre (COSMOS) at University of Mysore’s new campus at Chamundi foothills, was approached by a student who posed her queries on sharing of GST revenue among different States while another submitted a petition seeking income tax relief to Armed Forces personnel.

Apart from interacting with the student posing questions on GST, the Finance Minister also obliged many students seeking a selfie with her.

Meanwhile, the student seeking income tax relief for defence personnel, in his petition to the Finance Minister, said the Government should not levy any tax on any defence personnel serving the Army, Navy or Air Force. He urged Ms. Sitharaman to propose a ‘Tax-Free Salary’ for the Armed Forces personnel in the Parliament.