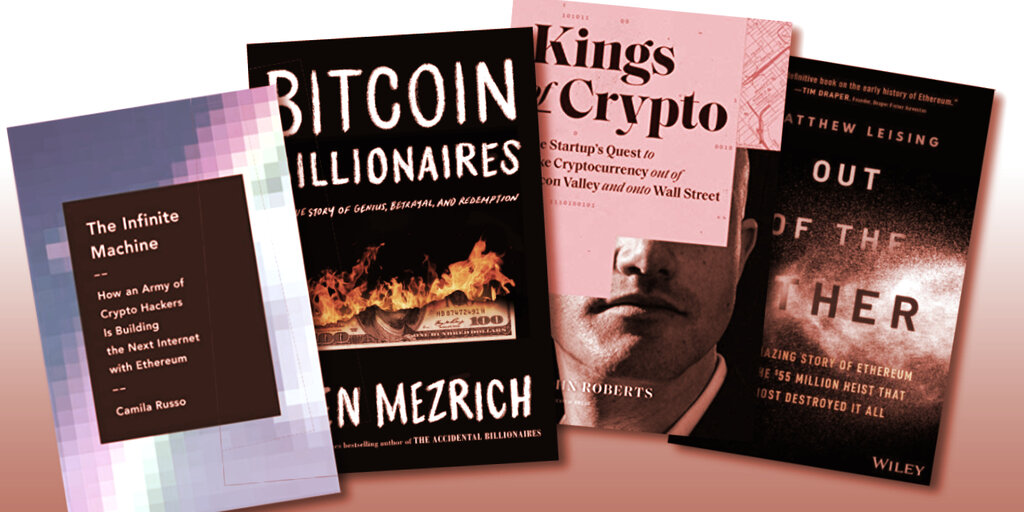 In 2021, crypto went more mainstream than ever before, and there’s now a growing library of books exploring Bitcoin and blockchain tech for the legions of crypto-curious.

Decrypt‘s staff has rounded up a list of our favorites:

We may still not know exactly who the pseudonymous Bitcoin creator Satoshi Nakamoto is, but Digital Gold will teach you nearly everything else you’d want to know about the creation and early rise of the top cryptocurrency.

Nathaniel Popper’s book, last updated with a new epilogue in 2016, starts with the early interactions between Nakamoto and his far-flung collaborators and then tracks Bitcoin through iconic points of interest like the Mt. Gox exchange hack and illicit Silk Road marketplace takedown. It also chronicles the rise of major crypto players like Erik Voorhees and the Winklevoss twins, among others. If you already know Bitcoin’s more recent history pretty well, then this is a richly compelling way to fill in the earlier gap. —Andrew Hayward

Camila Russo, a former Bloomberg journalist who has gone on to become the “chiefess” of leading DeFi publication The Defiant, is the author of The Infinite Machine: the first book dedicated to the history of the Ethereum blockchain. What Digital Gold is for Bitcoin, The Infinite Machine is for Ethereum. Meticulously researched and expertly related, the book is the thrilling tale of Ethereum’s “army of crypto-hackers,” its eight founding members.

Russo reveals how one of them, Charles Hoskinson, who went on to found Cardano, had a very different vision for Ethereum, and how Ethereum’s prime creator Vitalik Buterin—only 20 years old at the time—made the fateful decisions that would determine the future of a platform that is now worth over $400 billion. Russo deftly covers Ethereum’s founding, feuds, hair-raising hacks, and hard forks, as well as its phenomenal growth and role in the future of the Internet—making The Infinite Machine required reading for any Ethereum or DeFi enthusiast. And it’s heading to the silver screen soon—a film adaptation has been announced, which will be financed with sales of NFTs. —Adriana Hamacher

If you are completely new to blockchain and cryptocurrency, then this is the book for you. I speak from experience: when I first started exploring the industry, Bubble or Revolution helped crystalize some very complex concepts in an approachable, easy-to-understand manner.

It’s an ideal first step in your personal crypto education, starting with the creation of Bitcoin and the fundamentals and use cases of blockchain technology, while also providing a basic understanding of altcoins, crypto-economics, and growing business adoption. The three authors have backgrounds at Google, Microsoft, and Facebook, but deftly avoid getting bogged down in jargon or overly technical explanations. —Andrew Hayward

The follow-up to Mezrich’s The Accidental Billionaires, which chronicled the genesis of Facebook, Bitcoin Billionaires picks up with Tyler and Cameron Winklevoss winning a multi-million-dollar settlement from Facebook and embarking on a new venture: investing in this crazy new thing called Bitcoin. Along the way, Mezrich charts the growth of the cryptocurrency space, from the rag-tag cypherpunks and libertarians drawn to Bitcoin in its early days, to the suited-and-booted bankers and investors seeking to lay down a veneer of respectability atop crypto’s anarchic subculture.

[WATCH: Ben Mezrich talks to Decrypt about his new book on Reddit and GameStop]

The book is not without its flaws. The quick prose seems to have been written with one eye on the inevitable film adaptation. There are endless scenes at yacht parties and Ibiza clubs in which people deliver leaden lumps of exposition to the strains of a thumping EDM beat. And it’s a little tricky to identify with the multimillionaire Winklevoss twins’ quest to become billionaires, yet the author’s treatment of the protagonists is extremely friendly. The Accidental Billionaires was undeniably a more compelling underdog narrative, and Zuckerberg a more interestingly flawed protagonist. Still, it zips along, and it’s an interesting look at the growing pains of the cryptocurrency industry as it matures. —Stephen Graves

Out of the Ether pulls double duty as a book about Ethereum. On one hand, it follows the creation of the network, as Vitalik Buterin takes his bright idea from concept to execution with a diverse band of allies—and the fights and personality conflicts are well detailed, thanks to interviews with many co-founders.

But it’s also about the monumental 2016 hack of The DAO, the biggest ETH project of its era and the reason why the modern-day Ethereum forked away from what is now Ethereum Classic. The way it alternates between the two narratives doesn’t really benefit either story, but still, there’s a lot to glean about Ethereum’s origins and the existential threat that could have derailed its future. —Andrew Hayward

Written in the late 1990s, this guide to the then-nascent information revolution is extraordinarily prescient in some respects. It predicts, among other things, the birth of “cybercurrencies,” the political rise of charismatic demagogues around the world, and the emergence of state and non-state “cybersoldiers” who deploy “logic bombs” to attack infrastructure. The book’s central thesis is that the technology of the Internet and decentralized digital money will bring about a paradigm shift, as individuals move their assets into the digital realm, beyond the reach of the taxman. Starved of the ability to levy taxes, it argues, nation-states will fragment, with governments becoming, effectively, service providers to this new elite.

If that all sounds a bit apocalyptic, you’d be right. Davidson and Rees-Mogg argue that the old certainty of technology being a great leveler is about to come to an end; the new wave of technology, they say, will widen the wealth gap and lead to the emergence of an “information elite” lording it over a mass of disaffected have-nots. No surprise, then, that the book is enthusiastically endorsed by globetrotting billionaires like PayPal founder Peter Thiel (who contributes a foreword). It’s also been seized on by the libertarian fringe of the crypto community, who’ve lapped up its message of decentralized technology breaking the power of big government. You can see echoes of its influence in crypto exchange Binance’s claims to be a decentralized company with no headquarters, flitting from one jurisdiction to another; in the ethos behind privacy coins such as Monero; and in the assertion by the president of crypto-friendly Estonia that states will become “providers of a ‘service pack'” to digital nomads.

Still, the book ultimately paints a bleak picture; a new Gilded Age in which a neo-aristocracy hoards the digital wealth while an “increasingly jingoistic and unpleasant” underclass becomes ever more restive. Even democracy itself is called into question by the authors, which begs the question: when Elon Musk proclaims himself ‘technoking’… is he really joking? —Stephen Graves

Please excuse the inclusion of this book by Decrypt’s own executive editor, but it surely belongs in the pantheon of crypto tomes. If Digital Gold is the definitive origin story of the first cryptocurrency, and Infinite Machine is the birth story of the blockchain that launched DeFi, Kings of Crypto is the equivalent for the first mainstream U.S. crypto company, Coinbase. Despite the legitimate complaints crypto purists take with what Coinbase has become today, it remains the closest thing to a household name in the industry, the service that “normies” are most likely to try when they decide they’re ready to buy some Bitcoin, and thus the best company through which to explain the rise of crypto.

Jeff Roberts’s book is the kind of business book that prompts clickbait listicles like “5 insider secrets from the early days of Coinbase” because every single anecdote is interesting and surprising. It’s also the kind of book Coinbase CEO Brian Armstrong was subtweeting when he complained in August that, “Unfortunately a lot of narratives told by outsiders are wildly inaccurate or, worse, reveal their own biases.” Kings of Crypto is told by outsiders and former insiders, unbiased, and it concludes that Coinbase is a crypto success story. —Daniel Roberts

8.Cryptocurrency: How Digital Money Could Transform Finance, by Gian Volpicelli

This crypto primer from Wired takes the form of a whistle-stop tour through the history of cryptocurrency, taking in Bitcoin’s origins in the cypherpunk movement, the development of Ethereum, the ICO boom, stablecoins, and Facebook’s ill-fated Libra project. The through-line of Volpicelli’s narrative is that cryptocurrency was conceived of as a political project from the outset, and that every development has to be seen through that lens. His attitude towards the space as a whole is one of healthy skepticism, cutting through the hype and bombast to expose many of the industry’s weaknesses. The history of crypto, he writes, has been less actual disintermediation than “a history of successive waves of rhetoric about disintermediation.”

If the book has a flaw, it’s that it’s already out of date. As Volpicelli acknowledges, “Eras, in the industry, are a matter of months,” and much has already changed since its publication. The book reaches its climax with Facebook’s Libra stablecoin; since then,Facebook has rebranded as Meta and abandoned the renamed Diem project. NFTs, the dominant narrative in crypto over the past year, don’t even rate a mention in the book. Hopefully a revised and updated edition is in the works. —Stephen Graves