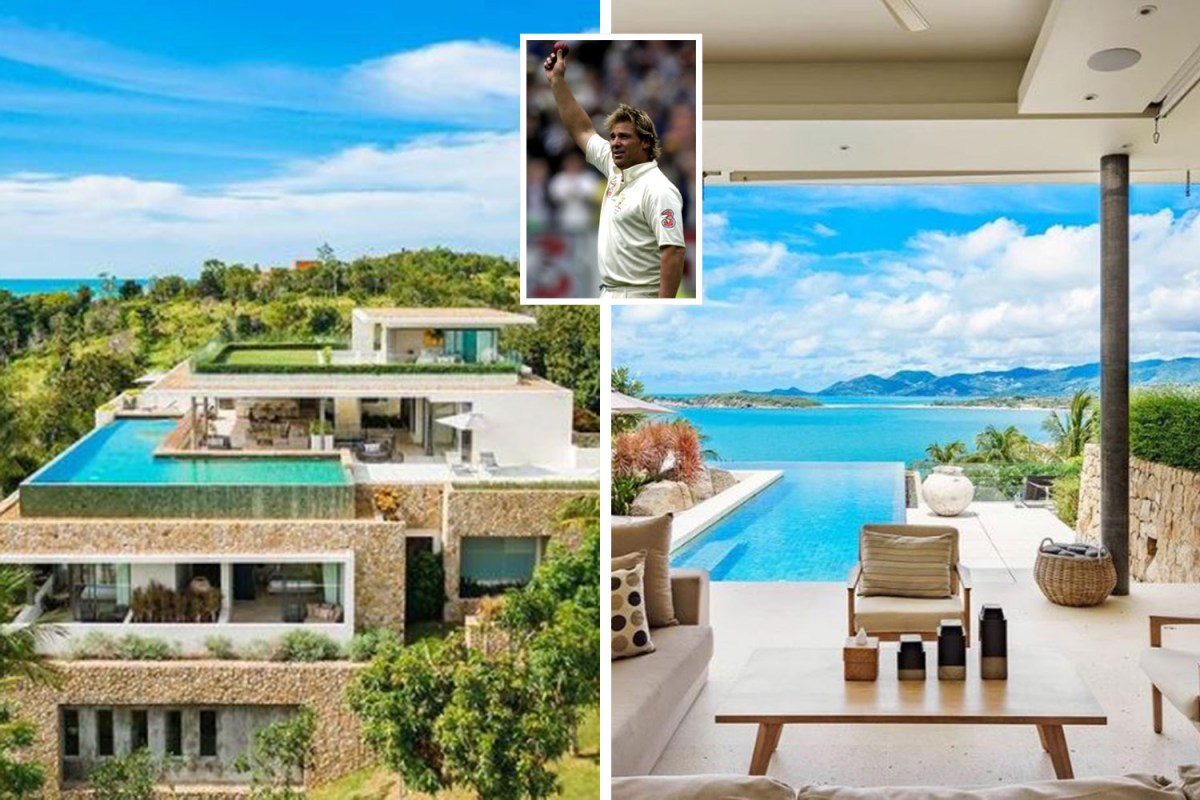 THIS is the luxury Thailand villa where Shane Warne was found dead after travelling to Koh Samui on a boys’ trip.

The sports legend was found unresponsive at the Samujana Villas resort after suffering a suspected heart attack at the age of 52.

The Samujana resort is located just ten minutes from the airport in the Cheong Mon area, nestled into a stunning hillside.

And the luxurious villa, said to be up to 1600sqm in size, is surrounded by crystal-clear ocean and white sand.

Warne and his pals had private beach access and the villa would have cost at least a thousand pounds a night.

The luxury resort, which has 23 “charming” villas, can have up to eight bedrooms for large groups of guests.

The home where the cricket legend was found dead also has an infinity pool, king beds in each room, and its very own private manager and maid.

Just hours before his death, Shane had shared a picture looking out at the garden and pool at his villa in Thailand.

Samujana’s website describes it as “the perfect place for friends and family to gather and have a great time” and promises guests an “unparalleled luxury experience”.

Warne posted the snap on his Instagram story with the caption “goodnight from @samujanvillas Koh Samui” with a heart emoji.

His management yesterday released a brief statement confirming the cricket ace had passed away.

“Shane was found unresponsive in his villa and despite the best efforts of medical staff, he could not be revived,” it reads.

“The family requests privacy at this time and will provide further details in due course.”

According to police in Thailand, Shane was staying with four pals who battled to save his life.

Police Senior Sergeant Major Suporn Hemruangsree said the group – who arrived in Thailand on Thursday – were sleeping on Friday afternoon when a pal tried to wake Shane, but he was unresponsive.

Officers said the friends performed CPR for around 20 minutes before an ambulance arrived and took him to the Thai International Hospital, where he was pronounced dead.

His death came just hours after tweeting his “sadness” at the death of cricket legend Rod Marsh who suffered a heart attack aged 74.

He said: “Sad to hear the news that Rod Marsh has passed. He was a legend of our great game & an inspiration to so many young boys &  girls.

“Rod cared deeply about cricket & gave so much especially to Australia & England players.

Shane captained the Australia national team in One Day Internationals and was widely considered one of the greatest bowlers in cricket history.

Perhaps the most-viewed cricket clip of all time, Shane Warne’s Ball of the Century at Old Trafford in 1993 was the start of the leg-spinner’s legend.

His very first delivery in Ashes cricket swerved in the air, landed outside Mike Gatting’s leg stump and turned so savagely that it clipped the top of off stump.

Australia won the match and clinched the Ashes. Gatting’s bemused look as he trudged off was a picture.

On December 21, 2006, Warned announced his retirement following the fifth Ashes Test match at the SCG.

He said it was his intention to “go out on top” and added that he might have retired after the 2005 Ashes series if Australia had won.