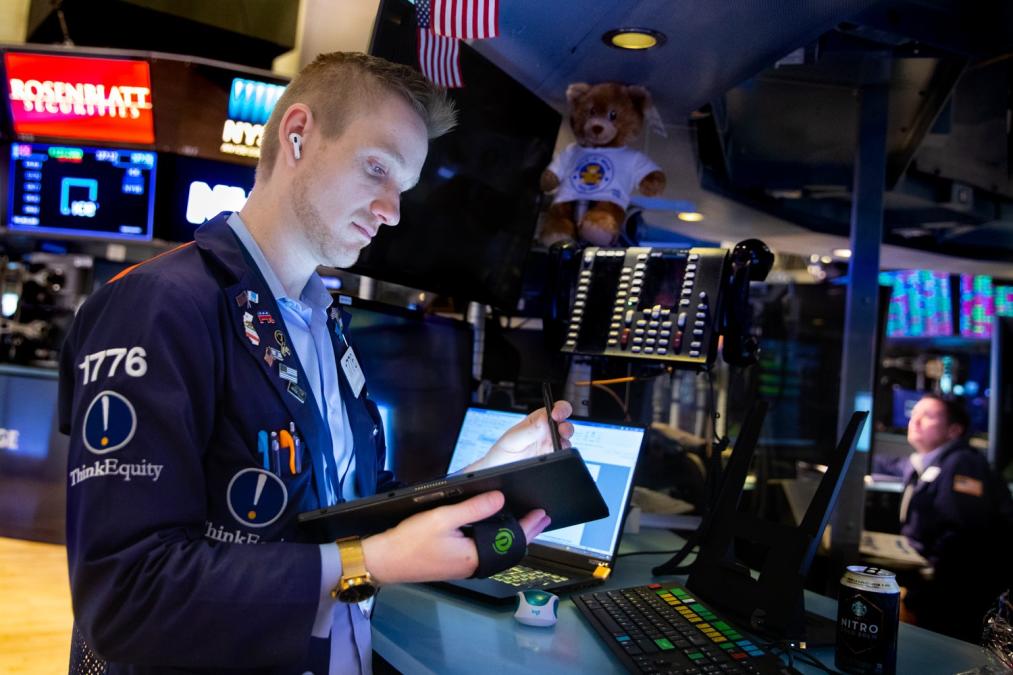 Stocks fell Friday as investors eyed a much stronger-than-expected report on the labor market’s recovery and continued to monitor for global economic fallout from Russia’s war in Ukraine.

The S&P 500 dropped to extend declines from Thursday. Treasury yields pulled back further as traders piled into safe havens including bonds and gold, and the benchmark 10-year yield dropped to below 1.8%. The risk-off tone Friday morning came amid news that Russia had seized Europe’s largest nuclear power plant in Ukraine, after Russian shelling set fire to the facility earlier.

A fresh set of economic data Friday morning reaffirmed to investors that the U.S. economy has recovered sufficiently to allow monetary policymakers to ease their crisis-era supports. The Labor Department’s February jobs report showed a greater-than-expected 678,000 jobs returned last month, with employment growth accelerating after Omicron-related cases retreated in the U.S. The unemployment rate improved more-than-expected to 3.8%, or the lowest since February 2020 before the pandemic. This mirrored the much better-than-expected private payrolls data out from ADP earlier this week.

And already, Fed officials have declared victory on fulfilling their employment mandate for the economy. In congressional testimony this week, Fed Chair Jerome Powell said that most Federal Open Market Committee (FOMC) members would agree that the labor market in the U.S. is now at a level consistent with maximum employment.

And even ahead of the February jobs report, Powell said he would back a 25 basis point interest rate hike at the Fed’s March meeting, putting to rest speculation that the central bank might press ahead with a more aggressive 50-basis point hike to jump-start its efforts to bring down inflation. But persistent price increases have left open the question of how aggressively the Fed will need to tighten monetary policy over the rest of the year.

Inflationary concerns have only compounded as crude oil prices spiked to hover at multi-year highs, with both West Texas intermediate and Brent crude oil prices rising more than 40% for the year-to-date and holding well over $100 per barrel. But for monetary policymakers, these concerns have had to be weighed against the uncertainty now generated by the crisis in Ukraine.

“The recent action over the last week, given the combination of the Russia-Ukraine situation but also the continued prints from inflation, have moved expectations down within the market to closer to five hikes, maybe even lower,” Matt Kishlansky, GenTrust Wealth Management Principal, told Yahoo Finance Live. “So I think the Fed needs to signal to that effect that they think that that’s really where they’re going to be.”

Bloomberg reported Friday that the White House was contemplating efforts to ban Russian crude oil imports into the U.S., in a move to further punish Moscow for its war in Ukraine.

Such a move has garnered support from a bipartisan group of lawmakers in Congress so far. House Speaker Nancy Pelosi said Thursday she would back such a move, as has Senator Lisa Murkowski, a Republican from Alaska, and Democratic Senator Mark Warner from Virginia, among others.

According to Energy Information Administration data, Russian crude oil comprised about 3% of total shipments arriving into the U.S. in 2021.

Apple (AAPL) CEO Tim Cook said during the company’s annual investor day Friday that the iPhone-maker would continue to offer annual dividend increases to shareholders. Apple’s board of directors last declared a cash dividend of 22 cents per share, payable Feb. 10 to shareholders as of Feb. 7. Shares. ofApple were down 1% in afternoon trading

Disney (DIS) said Friday it will introduce an ad-supported version of Disney+ streaming to consumers later this year, creating a cheaper option for consumers as the company continues to scale.

The new tier will be available in the U.S. starting in late 2022, and internationally starting in 2023.

Disney added it sees the new ad-supported offering as a “building block” as the company aims to bring on as many as 260 million Disney+ subscribers by fiscal year 2024. Disney last reported total Disney+ subscribers of 129.8 million as of its fiscal first quarter.

Here’s where stocks were trading just after market open:

U.S. equity futures cut losses from the worst points of the overnight session but still remained lower following the February jobs report. Contracts on the Dow were off more than 200 points following an earlier drop of more than 300 points, and contracts on each of the S&P 500 and Nasdaq were lower by about 0.5%.

The February jobs report from the Labor Department showed a better-than-expected 678,000 jobs returned last month versus the 423,000 expected, according to Bloomberg consensus data. The unemployment rate also improved to reach 3.8%, even as the labor force participation rate unexpectedly ticked up to 62.3%.

Average hourly wages were somewhat less hot than expected, alleviating some concerns for the moment over a wage-price spiral. Earnings rose 5.1% in February over last year, coming down from the 5.5% rate in January. And wage growth was flat on a month-over-month basis.

Here were the main moves in markets Thursday evening: