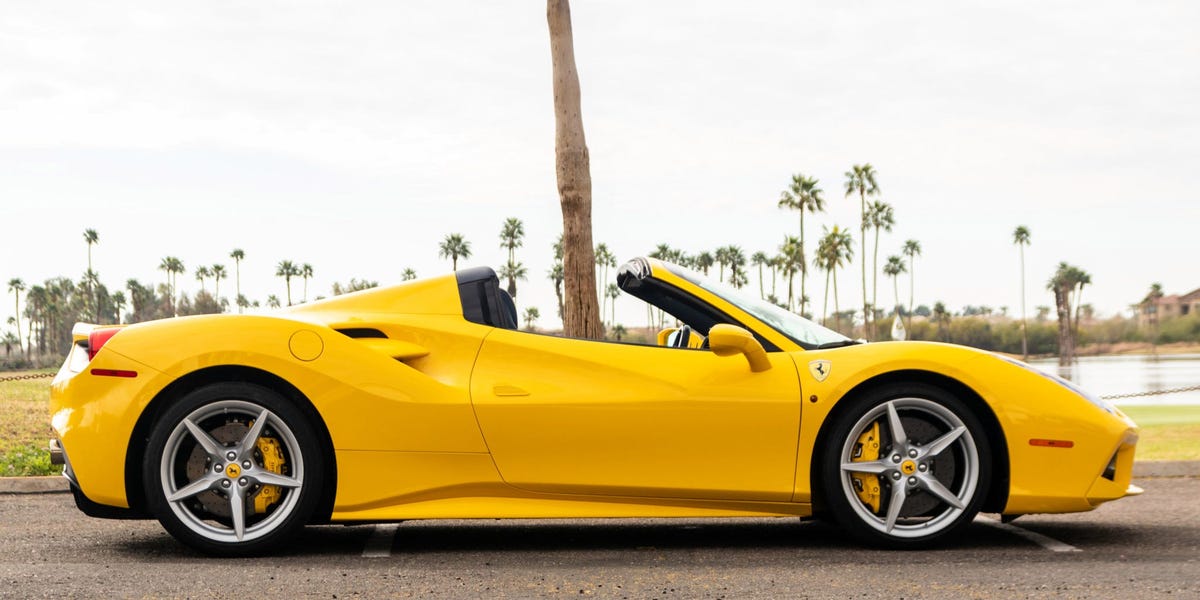 The 22-year-old Berliner posts pictures with expensive watches from brands like Audemars Piguet and Richard Mille, and drives Lamborghinis, Porsches, and Rolls-Royces.

His wardrobe boasts labels from across brands like Gucci and Prada, and he can often be found in a restaurant in Dubai, sampling truffle spaghetti and caviar.

If you didn’t know what he does for a living, you might think he was a pop star.

But Hossainpour belongs to a generation of young crypto millionaires, some of whom manage more money than  senior fund managers.

How did he get so rich so young?

He has always been a “little nerd,” Hossainpour said about himself in an interview with Insider.

He had his first computer when he was ten, he said.

His father was a programmer himself and taught him how to code, Hossainpour explained.

“At some point, my father told me, ‘Look at YouTube, these are two 20- to 30-year-olds, they created this site and now they’re billionaires.’ Why don’t you do something like that?” he said.

“Some do newspaper rounds, I created WordPress sites”

The young Berliner started programming after school and came across WordPress, a software that allows you to create websites. At that time, Hossainpour was also on gaming Internet forums, knew the gamer scene and its needs. For money, he started creating websites for gamers from the forums. For one website, he received an average of around $34 (€30). People from the gaming scene mainly wanted their own websites so they could sell items from games.

“Some do newspaper rounds, I created WordPress sites,” Hossainpour said.

At some point, he said, he “got the idea” that he was being paid much better for the same service in deep web forums.

“In addition to criminals, a lot of quite ‘run-of-the-mill’ people from the gaming scene hang out there,” said the 22-year-old. But instead of being paid in euros, he got bitcoin there. That was around eight years ago, when the cryptocurrency still cost around $14. For context, today the same Bitcoin is worth more than $48,000.

Getting paid in Bitcoin was Hossainpour’s first encounter with the crypto world.

“I also just thought that, at first, Bitcoin was simply a payment method for illegal goods,” he said.

That’s all he saw behind it at first, and so he exchanged his Bitcoin for money.

In 2013, Hossainpour said he then witnessed Bitcoin’s first really big price increase. At the time, the cryptocurrency cracked the 1000 mark for the first time, and by the end of November 2013, it had grown 80-fold since the beginning of the year. As a 14-year-old at the time, he thought, “If I had left what I earned in Bitcoin now, I would have a few thousand euros by now. That’s why I started looking into it.”

In addition to programming and school, Hossainpour started a YouTube channel called “Kyle Hoss” when he was 16, which he said was very successful. He mainly made entertainment videos, like reaction clips or eating tests. Almost 500,000 people have subscribed to his channel today, but he’s currently discontinuing it.

“All in,” he said. And that paid off. The price kept rising, so enormously that he cracked the million mark by the time he was 18.

“Absolutely crazy and insane,” Hossainpour said. “Crypto is like a cheat code for the younger generation to get rich quick.”

Instead of having a lot of money, his father would rather he’s “on the ball”

When his parents learned that he was suddenly a millionaire at 18, they were “absolutely shocked and surprised,” he said. “Especially because it’s crypto values. Numbers that are just numbers on a screen.”

Account numbers are also just numbers on a screen, but with crypto, it’s something else again, Hossainpour said. His parents first asked him if he could pay anything with it, if it was even legal, he recalled.

“But overall, my parents were very happy,” Hossainpour said. “My parents are both full-blooded Iranians, Persians, and academic education is very, very important there.”

He said his parents come from a wealthy family, but deliberately went to Germany because they didn’t want any of the money.

“That is, my father doesn’t attach that much importance to it, he’d rather that I’m on the ball,” he explained.

Currently, Hossainpour has two jobs — he runs a new YouTube channel “Hoss,” which is exclusively about the crypto world, and he invests in various cryptocurrencies with two friends in the form of a private equity fund. They use only their own equity.

“We sit around all day, investing back and forth, and we kind of have our finger on the pulse of the crypto market,” Hossainpour said.

He says he’s aware that bitcoin fluctuates enormously, but he’s not afraid of that and doesn’t see it as a reason against investing.

“I think you should be more willing to take risks when you’re young,” said the 22-year-old.

That’s because when you’re young, you usually have no liabilities, no marriage, and no children, Hossainpour explained.

“You can lose everything at 24 and then still have a normal life at 26, I think,” he continued.

He doesn’t invest in stocks or ETFs, only in cryptocurrencies.

“Many people expect or think that someone who’s in the market so much knows the craziest coins and invests in some really rare cryptocurrencies and has secret tips,” Hossainpour said.

But that’s not the case. He’s actually quite conservative with his crypto investments.

“Most small coins that are hyped up will fall back to zero,” he said.

“Those are the four assets I believe in the most,” Hossainpour explained.

His first car was a Ferrari 488 Spider and he broke “many, many” rims, he said

Hossainpour, in terms of his bank account (Insider was able to get a glimpse into his crypto-deposit), has already achieved almost everything in his early twenties. He’s already financially free and can treat himself to things most can only dream of.

“The car has a lot of power and isn’t recommended for novice drivers, including me at the time,” he added.

He wouldn’t say he regretted driving that car as a first car, but he “learned from it.”

“I broke many, many rims,” he recalled.

He currently drives a Bentley Continental GT, which is in a similar price range. But it’s “much more comfortable and relaxed.