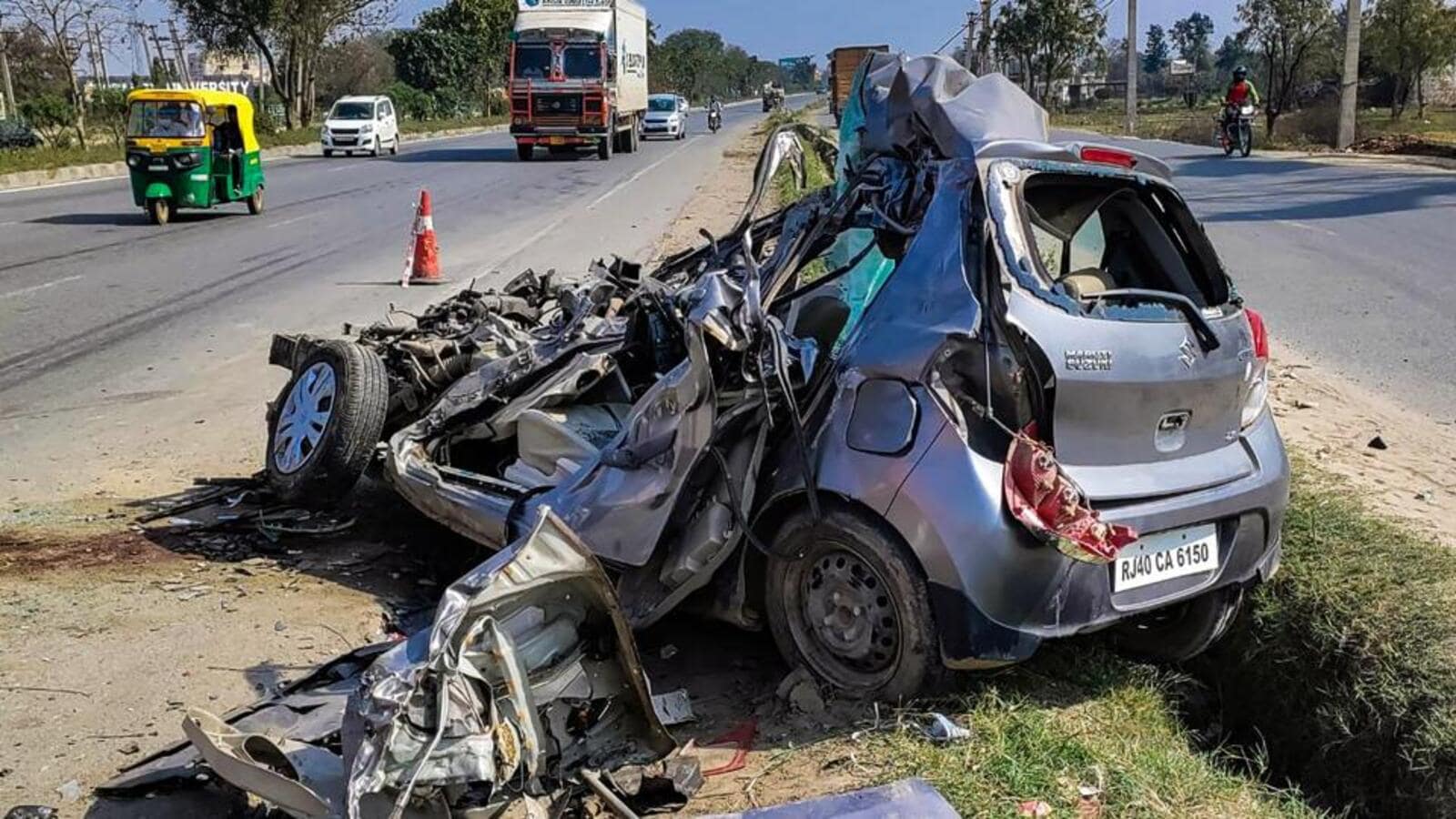 Five people were killed after the car they were travelling in rammed into a truck on the Delhi-Jaipur Highway (known as NH-48) early on Thursday morning, the police said, an incident that took place around an hour after an accident on Gurugram’s Golf Course Road left four people dead. One of the victims was celebrating his birthday and the five were on their way to celebrate at a restaurant, said a friend of the victims.

According to the police, the car was headed towards Bhiwari in Rajasthan from Kakrola in Haryana’s Bilaspur, when it rear-ended a truck on the highway. All five occupants of the car were killed on the spot, said police officers.

Police said all five were taken to government hospital in Sector 10 where doctors declared them dead on arrival.

The driver of the truck is at large, and investigators said they were searching for him.

The five victims all worked as senior officials in the same private firm, which provides logistical support for e-commerce companies. The men were identified as Chandra Mohan (26), from Hindwan in Hisar, Bharat Bhushan Rajora (30), a resident of Paschim Vihar in Delhi, Praveen Sharma (32) of Chitakhal in Bihar’s Siwan disrtrict, Ashish Singh (27), from Bhiwari in Rajasthan and Sandeep Jangra (25), from Geong in Haryana’s Kaithal district.

Ashish Singh, who owned the car, was behind the wheel, said the police.

Kamdev Kumar, an accounts manager at a private firm, said Mohan and Sharma were branch managers, Rajora was administration head, Singh was sales manager and Kumar was logistics supply chain in-charge at the company. Mohan, he said, was posted in the Ghaziabad branch, and the rest worked in the Kakrola branch.

Kumar said it was Mohan’s birthday and he had travelled from Ghaziabad to Singh’s residence in Kakrola to celebrate it. Afterwards, all of them left for dinner at a restaurant when the accident took place between 2am and 2.30am on Thursday, said police.

The impact of the accident left the car mangled beyond recognition, said police, adding that it took over an hour to remove three of the bodies.

Gurugram deputy commissioner of police (traffic) Ravinder Singh Tomar said that a preliminary investigation showed that it was likely that the driver did not spot the truck in the dark since it had no tail-lights.

“By the time Singh could have controlled his car, it was too late and rammed the truck from behind,” Tomar said.

He said a road safety cell team, headed by assistant commissioner of police (traffic headquarters) Sanjeev Kumar, was investigating the cause of accident.

“The probe will reveal if the truck was stationary or if the driver suddenly hit the brakes, which led to the car ramming it from behind,” Tomar said.

He said that the team was also examining if there were any CCTV cameras on the route or in shops alongside it to ascertain the cause of the accident in a few days.

The firm’s managing director, Rajesh Singh (Ashish’s uncle), filed a complaint in the matter, and an FIR was registered under sections 279 (rash driving) and 304A (causing death by negligence) of the Indian Penal Code at Bilaspur police station.

In his complaint, Singh alleged that the truck driver hit the brakes, and the car rammed into it, since the truck did not have tail lights.