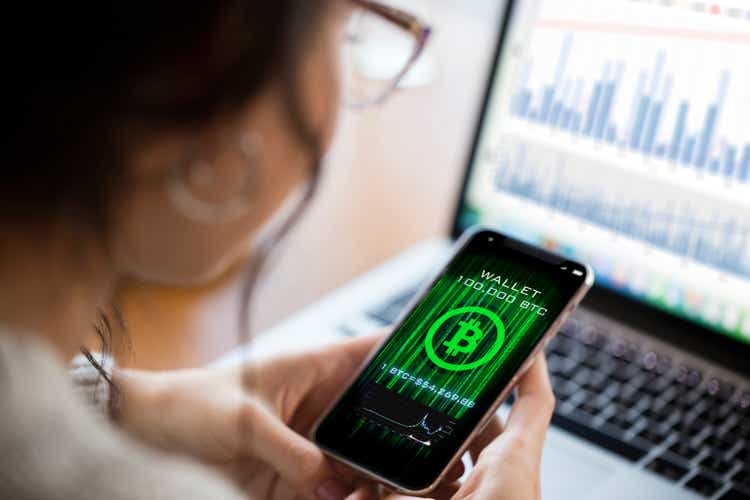 Bitcoin (BTC-USD) has gone through a lot of stages in the mind of adherents, with the focus being anywhere from decentralized money, personal banking, a store of value, and a hedge against inflation, among other things.

Those things are what drove the price of Bitcoin up over the years, and once institutional investors, or wealthy individuals started getting bullish on Bitcoin, the price gained even more momentum.

But what the ‘smart’ money temporarily gave to Bitcoin, it has also taken away.

In this article we’ll look at what they’ve got wrong and why the correlation between Bitcoin and high-growth tech stocks is only a temporary phenomenon.

I’ve chuckled some recently over the sensationalism of many financial writers that have declared Bitcoin having failed to live up to its promise in areas like store of value and being an uncorrelated asset class to other asset classes.

The problem for these writers is they don’t appear to be aware of the underlying reason why the price of Bitcoin started to move in conjunction with high-growth tech stocks, instead, declaring it was no longer uncorrelated to other sectors of the market.

The reason this has occurred is because large investors relatively new to the Bitcoin and crypto market, didn’t know how to classify cryptocurrencies in their minds, so lumped it together with high-growth tech stocks, trading them in the same manner. This is a huge mistake I believe they’ll regret in the years ahead.

What many financial writers aren’t aware of is institutional investors use what’s called the discounted cash flow (“DCF”) model when making investment decisions concerning high-growth tech stocks in a rising interest rate environment. What the discounted cash flow model generally does is discount the valuation of future cash flows as the yield on the 10-year Treasuries jump.

Responding to the Federal Reserve talking hawkish about raising interest rates throughout 2022, institutional investors started selling off riskier tech stocks and Bitcoin. The reason why is they had no idea how to classify Bitcoin, so they lumped it together with tech stocks as they rotated capital to perceived safer asset classes.

In other words, they didn’t know how to classify Bitcoin in this challenging environment, so they treated it in the same way they treat high-growth tech stocks; they sold a significant portion of their Bitcoin holdings.

What that did was embrace the idea that Bitcoin and tech stocks were now moving in correlation with one another, when the reality was the big money was selling off both, creating the illusion of the correlation. That’s not going to last long.

While it’s important to understand this, we still have to deal with the reality of how big money is responding to the fear permeating the market, whether or not it’s justified.

With that in mind, I see institutional money and wealthy individuals continuing to play the market this way, but I think a lot of Bitcoin they wanted to sell has already been sold. Depending on how geopolitical events unfold, there could be one more big sell-off before we find a predictable bottom for Bitcoin.

It looks like that’s more probable because of it soaring over $10,000 over a period of a few days. It’s due for a breather in and of itself, without any outside catalysts affecting the price. If there is another negative catalyst, it’ll leverage that to another big downward move in the price, but afterwards, would start to move up on a sustainable basis, in my opinion.

As for the correlation between Bitcoin and tech stocks, that narrative is already starting to fall apart in light of the events unfolding between Russia and Ukraine.

With access to banking and assets reportedly at a standstill in Russia and Ukraine, it has once again brought to the forefront the value of Bitcoin as a financial asset outside the banking system.

At this time, it’s difficult to separate fact from fiction concerning the narrative surrounding Bitcoin in the two countries, but there is no doubt many people have that as their only monetary holding at this time. This is highlighting the value of Bitcoin in making individuals and businesses that own them their own personal bankers.

It also reinforces the idea that sanctions can’t touch it; not just sanctions concerning Russia, but sanctions imposed by a growing number of social networking sites and fintech businesses toward those they don’t agree with or approve of.

As long as Bitcoin is stored in a cold wallet, nothing can be done from retaining the asset or in deploying it in any way the owner wants to. That truly is freedom.

The point there is this provides the general public a glimpse at the tremendous value represented in having some of their capital invested in Bitcoin. Over time, this and other characteristics of Bitcoin will once again, drive the price up.

When institutional and wealthy individual investors started taking positions in Bitcoin, it was a positive catalyst because it was a sign Bitcoin was being more widely adopted.

But as we’ve discovered recently, the ‘smart’ money considered Bitcoin to be the same type of asset as high-growth tech stocks, and they sold them both off, creating the big downward push in Bitcoin and other cryptocurrencies. I believe that’s a mistake they could regret in the future. It appears retail investors that followed in their footsteps may end up wishing they hadn’t sold off either.

The war between Ukraine and Russia has reminded investors that Bitcoin has value at a number of levels, with one of them being it is outside the banking system. This will help investors to see that there in fact is no correlation with stocks, commodities or bonds, and neither with central banks nor the banking system.

For those newer to Bitcoin, learning there is no correlation between Bitcoin and these other asset classes will go a long way toward keeping you from selling off in the future because of the volatility of Bitcoin.

Bitcoin isn’t correlated with high-growth tech stocks, any more than it is correlated with the banking system. The only reason it has recently had the appearance of being correlated is because institutional investors sold off, while long-term holders that know what they’re doing, didn’t.

We should ignore the clickbait headlines, understanding that the price of entry to Bitcoin is its volatility. That volatility largely comes from those that are short-term holders that aren’t aware of the price potential Bitcoin has yet to attain.

As we’ve seen over the last several months, ‘smart’ money, in the case of Bitcoin, became ‘dumb’ money when started to consider Bitcoin to be in the same asset class as tech stocks. We’re already starting to see that narrative crumble, and it’ll continue to reaffirm that Bitcoin is not correlated to other asset classes, and only the selling of Bitcoin by those that don’t see that, temporarily gives the impression it is moving in conjunction with growth stocks.

Last, with the Federal Reserve’s Jerome Powell saying it’s likely the Fed will only raise rates by a quarter point, the downside probably will be less than it would have been if it had raised it by more.