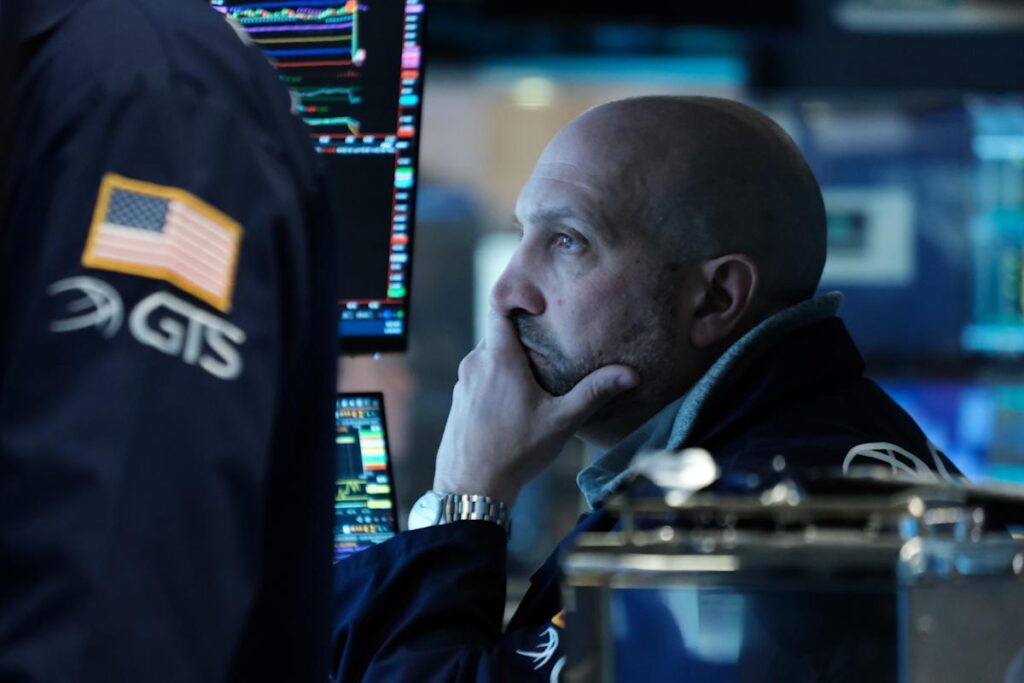 U.S. stocks fell sharply on Tuesday to mark another volatile day on Wall Street as investors weighed intensifying Russian attacks on Ukraine and an onslaught of new sanctions by the West against the likelihood geopolitical uncertainty could knock the Federal Reserve off course for an aggressive first bump in interest rates.

Meanwhile, WTI crude oil jumped as much as 10% to top $105 per barrel, marking its highest price since 2014 amid worries around a disruption in the energy sector.

Russia’s economy was in the limelight on Monday after a ramp up on penalties by the U.S. and European allies for its invasion of Ukraine rocked the country’s financial system and sent the ruble tumbling 30%.

Measures by the U.S. and Europe, including a move to block some Russian banks from the SWIFT payment network and sanctions on the Central Bank of Russia, have already dealt a harder-than-expected blow to the country’s economy, testing a decades-long effort by President Vladimir Putin to make the system sanction-proof.

The Russia-Ukraine crisis “is going to create enormous pain and hurt to the Russian economy,” Virginia Sen. Mark Warner told Yahoo Finance Live on Monday. “This is a much bigger economic hit than Putin anticipated.”

As investors watch the crisis intensify overseas, in the U.S., they revert their attention back to the Federal Reserve and its plan to lift interest rates as soon as this month.

Sky-high inflation prints month-over-month have elevated concerns among market participants that central bank officials will raise short-term borrowing costs more aggressively than expected to mitigate increasing prices, even stoking the possibility of a double interest rate hike of 50 basis points mid-March. But with ambiguity over how the Russia-Ukraine turmoil will pan out, Fed watchers anticipate the central bank may tread lightly on its rate hike.

“Given the current conflict in the Ukraine, there remains considerable near term uncertainty with central bank intentions,” LPL Financial strategists Lawrence Gillum and Ryan Detrick said in a note, adding that upward pressure on the prices of oil and other commodities and sanctions against Russia could result in broader economic repercussions. “As such, inflationary pressures may remain high particularly as it relates to gas prices.”

Still, like many Fed-watchers, LPL has priced in a first hike of 25 basis points this month – for now.

“Until there’s either some sort of negotiated deal or the violence calms down in Ukraine, markets will remain at heightened risk and Powell will be looking to be a little more careful,” Spouting Rock Asset Management chief strategist Rhys Williams told Yahoo Finance Live.

Here were the main moves in markets during midday trading

The Commerce Department reported a 1.3% increase in construction spending and an upward revision on December data that reflected construction outlays rose 0.8% instead of the 0.2% initially reported.

Homebuilding remains under pressure from higher costs on building materials despite the surge in January. The National Association of Homebuilders said last month that building material production snafus were inflating construction prices and delaying projects.

Manufacturing activity in the U.S. picked up more than expected during the month of February as COVID-19 infections fell. Hiring at factories, however, slowed, worsening supply chain disruptions and placing upward pressure on input prices.

The Institute for Supply Management (ISM)’s latest print on its index of national factory activity rose to a reading of 58.6 last month from 57.6 in January, which marked the lowest figure since November 2020.

A reading above 50 points to an expansion in manufacturing, which accounts for 11.9% of the U.S. economy. Economists surveyed by Bloomberg anticipated a print of 58.0.

Kohl’s Corp. (KSS) missed analyst estimates for the fourth quarter but reported an upbeat revenue outlook for 2022 and said it will “build its momentum” this year.

Meanwhile, the company said it was engaging with unsolicited bidders. Kohls has been under pressure from activist investors including Macellum Advisors and Engine Capital to raise its shareholder value and improve financials, and also urged to consider spinning the company off into separate online and brick-and-mortar businesses, calls the retailer rejected.

Shares of Target (TGT) jumped 14% at open after the company reported a better-than expected outlook for its annual adjusted earnings per share.

The retailer smashed analysts’ profit forecasts for the fourth quarter as consumers sought out deals on apparel and food amid rising inflation.

“The quarter was driven by traffic. So that means consumers voted with their with their feet and their clicks and picked Target more often. So that’s an incredibly healthy sign for for our business,” Target CFO Michael Fiddelke said on Yahoo Finance Live.

Here’s how contracts on Wall Street’s main benchmarks fared ahead of Tuesday’s open:

Here were the main moves in markets ahead of overnight trading Monday: