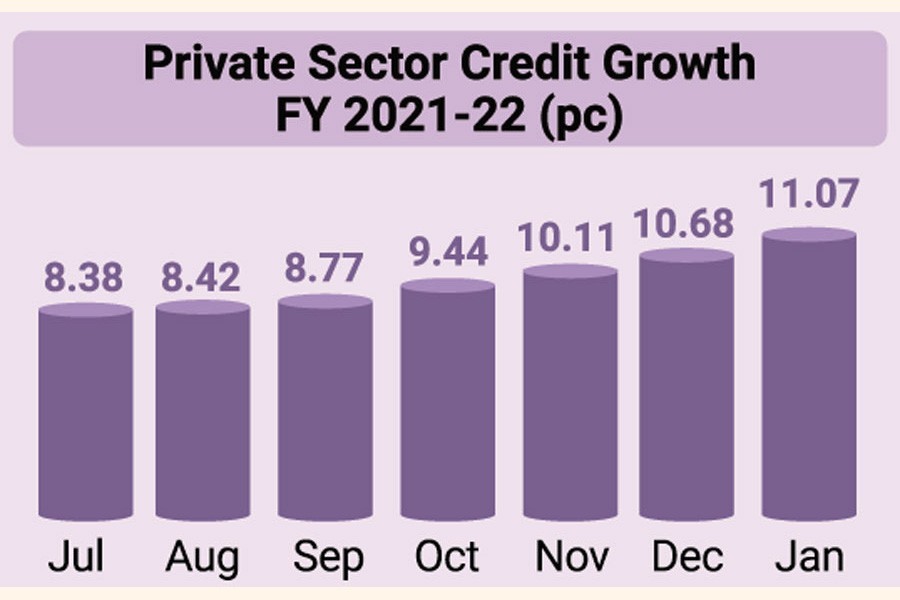 The reopening of the country’s overall business activities has helped push up the credit growth, officials say about the January upturn.

According to the central bank’s latest statistics, the credit flow rose to 11.07 per cent in January 2022 on a year-on-year basis, from 10.68 per cent a month before.

“The private-sector credits picked up further in January following higher import-payment obligations as well as the reopening of economic activities,” a senior official of the Bangladesh Bank (BB) told the FE Monday.

He also says the credit growth increased during the period under review mainly due to higher trade financing for settling import-payment obligations.

Besides, higher prices of essential commodities, including petroleum products, on the global market also pushed up the country’s import payments during the period under review, he explains.

The central banker expects the existing upward trend in private-sector credit growth to continue in the coming months if the demand for credit persists.

Echoing the BB official’s views, Syed Mahbubur Rahman, Managing Director (MD) and chief executive officer (CEO) of Mutual Trust Bank Limited, says such credit growth is likely to rise further in the near future ahead of the Holy Ramadan.

Normally, a large quantity of essential commodities is imported to meet the additional demand of consumers during the month of Ramadan, the month of fasting and functions.

“Trade finance along with purchasing of capital machinery has helped in increasing the private-sector credit growth during the period under review,” the senior banker says while explaining the upward trend in such credit flow.

Bangladesh’s overall import expenses jumped more than 54 per cent to $38.97 billion during the July-December period of FY ’22 from $25.23 billion in the same period a year ago, BB data show.

On the other hand, the settlement of letters of credit (LC), generally known as actual import, in terms of value, rose by nearly 7.0 per cent to $6.41 billion in January – from nearly $6.0 billion in the previous month.

Actually, Bangladesh’s overall imports have increased significantly in recent months, following gradual reopening of economic activities – both at domestic and global levels – after more than one year of Covid-19 pandemic upset.