Ukraine is planning to issue a “war bond” to fund its armed forces in their battle against Russian invasion as the country sought to reassure international investors that it will not default on its debt.

The Ukraine finance ministry unveiled its plans to raise money to fund its war effort, in the announcement of a new bond auction scheduled for Tuesday. “In the time of military aggression of the Russian Federation, the ministry of finance offers citizens, businesses and foreign investors [the chance] to support the budget of Ukraine by investing in military government bonds.”

On an investor call with bond fund managers on Monday, Ukraine’s government commissioner for public debt management Yuriy Butsa described the fundraising exercise as a “military bond” aimed at “everyone who wants to support the budget in these troubling times”.

“Unfortunately, it’s not a regular exercise for us this time,” he said. “I was not trained as a military expert, but now everyone has to be one.”

Ukraine’s central bank has imposed capital controls as an emergency measure, which will make it difficult for overseas investors to participate in the auction, according to one fund manager on the call. But the bond should attract “decent local demand”, the fund manager added.

The sale comes after a sharp plunge in the prices of Ukraine’s existing bonds, as investors worry the Russian invasion will push Kyiv to default on its debt. Ukraine’s dollar bond maturing in 2032 dropped to a price of 31 cents on the dollar on Monday.

“We are not planning any restructuring and we will honour our debt accordingly,” Butsa said, adding that the “money is on the way already” for Ukraine to make a scheduled coupon payment of around $290mn to international bondholders due on Tuesday.

On top of seeking money to finance the war effort, the Ukrainian official made a direct plea to bond investors to take further steps in order “to make the pain for Russia as hard as possible”.

“You can lobby for exclusion of any Russian instruments from the indices,” Butsa said. “The second thing I think that is also possible to do is to lobby rating agencies for the downgrade of the rating of Russian companies.” 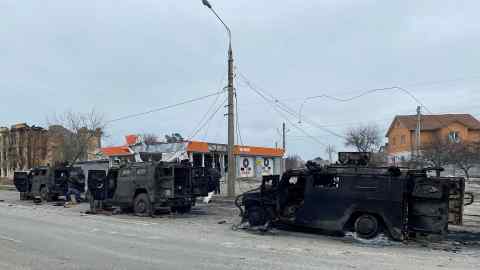 Under sustained questioning from investors, Butsa pushed back on the notion that the country might alter its policy of servicing its debt on time if the war drags on, noting that Ukraine’s $18bn debt restructuring in 2015 had curtailed its access to debt markets for a long time.

The Ukrainian finance ministry said that the new bonds would have a one-year maturity with the interest rate offered to investors “to be determined in the auction”.

“The proceeds from the bonds will be used to meet the needs of the armed forces of Ukraine and to ensure the uninterrupted provision of the state’s financial needs under the war,” the finance ministry said.

Ukraine’s announcement came on the same day the Russian rouble plunged by as much as 29 per cent and its bonds sustained a heavy blow after western allies hit Moscow with a string of unprecedented sanctions.