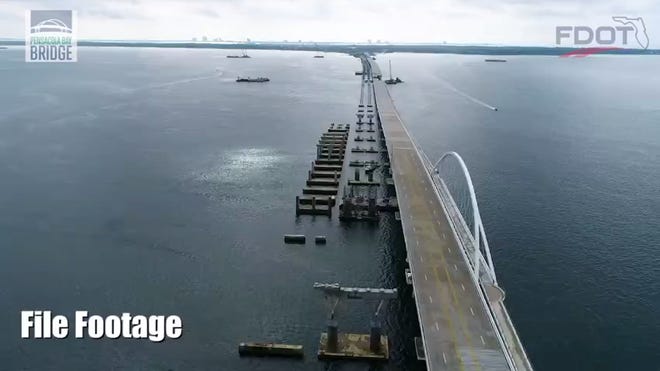 After construction barges took out the Pensacola Bay Bridge during Hurricane Sally, Skanska, the construction company building the bridge, relied on a 19th century federal maritime law to try to limit its liability for the disaster to the value of the barges.

State Rep. Alex Andrade, R-Pensacola, is sponsoring the legislation that would remove part of that defense for future companies, and, he said, make sure no community in Florida goes through what Pensacola went through after Hurricane Sally.

“I had a front-row seat, and I experienced it along with everyone in my community, the suffering that was caused by this disaster,” Andrade said.

The bill making its way through the Florida Legislature would require state road contractors working over navigable waters to have a liability insurance policy for third-party damages. The amount of liability coverage would be set by the Florida Department of Transportation.

The bill, HB 157, is a larger transportation policy bill that includes other changes to how FDOT handles contracts and allows FDOT to delay increasing tolls rates based on inflation for another five years.

The bill won the unanimous backing of the House Commerce Committee on Wednesday and will now go to a full vote by the House.

The section of the bill related to bridge construction would only require personal injury or damage to property to be covered, but not economic damages.

More than 1,000 Northwest Florida business owners and residents are suing Skanska right now to seek economic damages caused by the bridge being out of commission for eight months. One of their hurdles is a 1927 U.S. Supreme Court Case called Robins Dry Dock and Repair Co. v. Flint, which requires that physical damage must occur to seek a claim against damage caused by a vessel.

That precedent doesn’t apply to Skanska, a federal judge in Pensacola ruled last year, because the company was negligent in preparing for Hurricane Sally. Skanska is appealing the case to the 11th Circuit of the U.S. Court of Appeals in Atlanta.

Andrade said he is working to bring a change to the law next year that would require contractors to be liable for economic damages as well.

“Once I open that statute up to say, if you’re going to do business with DOT you have to have this (liability) provision, what I can do next year — I already have the language drafted — is to try and fight to also say, if you’re going to contract with DOT, you waive your right to limit liability based on Robins Dry Dock, which would get us the full economic damages that we’re trying to get,” Andrade said.

Sam Geisler, an attorney with Aylstock, Witkin, Kreis & Overholtz, is representing many of the more than 1,000 people suing Skanska.

“If this bill were in place prior to Hurricane Sally, then Skanska would have been required to have general liability insurance to cover personal injury and physical damage to property owners — providing a source of coverage for those whose property Skanska damaged, from docks and seawalls to the Escambia County Fishing Pier,” Geisler said.

Geisler said the law would have also avoided the delays his clients are seeing now as Skanska appeals the federal judge’s ruling.