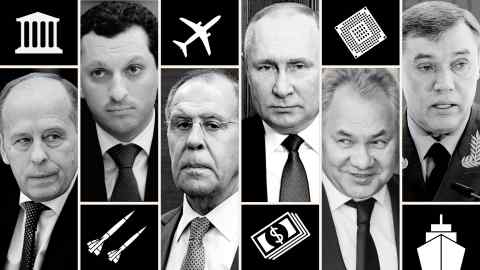 The Stoxx Europe 600 share index fell 1 per cent, taking it almost 10 per cent below its January peak. The Stoxx banks sub-index fell 6.7 per cent as traders responded to uncertainty about western allies locking some Russian lenders out of the Swift payments system. Germany’s Xetra Dax lost 2.2 per cent.

The moves came after Russian president Vladimir Putin put his country’s nuclear forces on high alert and western powers imposed sanctions on Russia’s central bank in response to the invasion of Ukraine.

Futures markets implied the US S&P 500 share index would drop 1 per cent in early New York dealings while the technology-focused Nasdaq 100 would fall 0.9 per cent.

Global equities had rallied on Friday as traders reacted to punitive measures against Russia steering clear of the nation’s energy exports. But after financial sanctions against Russia were ratcheted up over the weekend, fund managers de-risked their portfolios, closing out strong bets on the global economy and future central bank policy while loading up on low-risk and easily tradeable assets.

“Investors are reducing their active bets,” said Michael Metcalfe, head of macro strategy at State Street. “Right now is a time to take stock, reduce positions and try to assess all the possible outcomes that could arise” from the geopolitical situation, he added.

The dollar index, which measures the currency against six others, rose 0.4 per cent. The yield on the two-year US Treasury note dropped 0.09 percentage points to 1.5 per cent, reflecting a significant rise in the price of the debt.

“It’s a flight to safety and cash is king at these times,” said Tatjana Greil Castro, co-head of public markets at credit investor Muzinich & Co. “Asset managers will have concerns about clients wanting to take money out and you want to pre-empt that by having liquidity to meet potential redemptions.”

The rouble dropped as much as 29 per cent to almost 118 against the US dollar on Monday morning, later trimming some of its declines. Russia’s central bank more than doubled interest rates to 20 per cent on Monday and banned foreign selling of local securities in a bid to stem the fallout from sanctions.

A FTSE index of emerging market stocks also outperformed on Monday, trading flat, as investors backed out of a popular trade based on betting against developing economies that remain affected by high rates of coronavirus.

“If investors have sizeable positions away from their target benchmark, these positions may feel too risky at the moment,” Metcalfe said. “One of the active bets many have had is to be underweight [emerging markets] so slightly perversely they have to buy back.”

Elsewhere, shares in BP dropped 6.1 per cent after the British group said at the weekend it would divest its near 20 per cent stake in Russian state oil provider Rosneft.

In Asia, Hong Kong’s benchmark Hang Seng Index fell as much as 1.6 per cent to its lowest level in almost a year before paring losses to close down 0.2 per cent.

Robert Armstrong dissects the most important market trends and discusses how Wall Street’s best minds respond to them. Sign up here to get the newsletter sent straight to your inbox every weekday