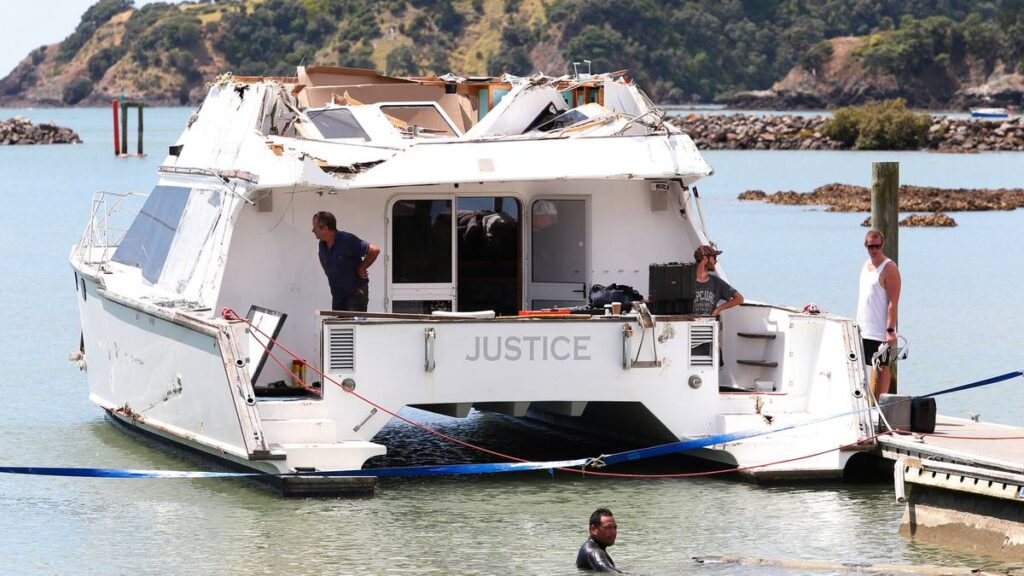 Salvaging one of the many boats damaged in the January Tūtūkākā marina tsunami surge. Photos / Michael Cunningham

More than $3.862m of insurance claims has come after damage to the marina itself.
Claims totalling $1.947m were also made for 49 damaged boats.

Grafton said there were total of 60 claims from the tsunami surge that hit after the Hunga Tonga- Hunga Ha’apai volcano exploded underwater. These included for boats in the water and trailer craft as well as a vehicle.

Grafton described damage to the marina itself as extensive.

Claims for damage to the marina itself including to piers and piles make up about 65 per cent of the overall total claim value.

But boaties’ insurance claims top claim numbers, making up more than 80 per cent of the claims.

Grafton said 60 claims for a single insurance event was a large number.

He said he was not aware of previous Tutukaka Marina tsunami damage insurance claims.
ICNZ took the not-often-used step of appointing an insurance co-ordinator to oversee January Tutukaka Marina damage claiming and co-ordinate the provision of services needed by the range of affected people working to reinstate assets.

Grafton said this was because of the event’s size and complexity of its consequences.

The shape of the harbour is recognised for amplifying tsunami effects, increasing their impacts over and above what would otherwise be expected.

Tsunami scientist Jose Borrero has recently revealed an additional offshore influence may contribute to this amplification.

The Tongan explosion’s sonic boom heard by Northlanders super-charged the tsunami’s power as it travelled almost 2000km south to the marina in just four hours. Very strong swirling currents and unusual tidal action were its most obvious manifestation.

Tutukaka is one of six marinas in Northland. Hunga Tonga- Hunga Ha’apai volcano has been erupting on and off for 13 years, January 15’s explosion its biggest since 2009.