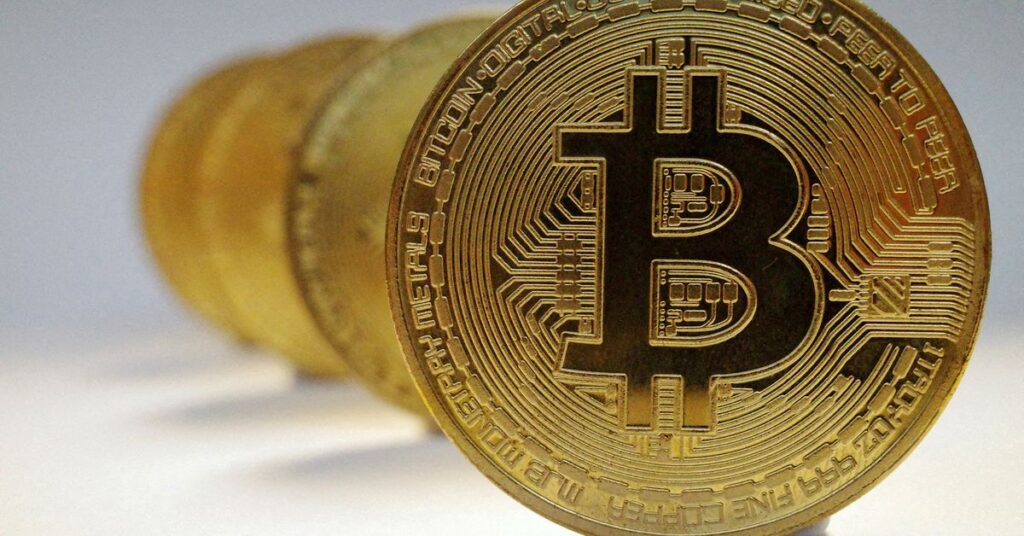 A representation of the virtual cryptocurrency Bitcoin is seen in this picture illustration taken October 19, 2021. REUTERS/Edgar Su/File Photo

NEW YORK, Feb 24 (Reuters) – Stablecoins, which are virtual tokens pegged to traditional currencies such as the U.S. dollar, held gains on Thursday in the midst of a sell-off in risk assets such as stocks and bitcoin after Russia launched a full-scale invasion of Ukraine.

Most stablecoins were slightly higher on the day. Their market capitalization was up 0.3% at $182.5 billion, according to cryptocurrency data tracker coinmarketcap.com. Its daily trading volume, though, surged 75% to $108.1 billion.

Ukrainian forces battled Russian invaders around nearly all of the country’s perimeter on Thursday after Moscow mounted a mass assault by land, sea and air in the biggest attack on a European state since World War Two. read more

“You have a risk-off environment that’s been happening for months now, and that in some ways has increased the demand for digital dollars, and so we’ve certainly seen into the end of last year and through today pretty significant growth in demand for USDC,” said Jeremy Allaire, cofounder and chief executive officer of Circle, referring to the stablecoin USD coin, pegged to the U.S. dollar on a 1-to-1 basis.

The USD Coin was up 0.1% at $1, coinmarketcap data show. Some of the biggest stablecoin gainers were Fei USD, a stablecoin in the decentralized finance space, which was up 1.2%, and Liquity USD, which rose 1.4%.

“While stablecoins have a much tighter range and less volatility than other crypto assets, in reality their supply is limited,” said Joe DiPasquale, chief executive officer at BitBull Capital, which manages crypto funds.

“When there is a spike in demand for assets like USDC on exchanges, it’s possible to see their value go up a fraction of a percent, as we’ve seen in the last 24 hours,” he added.

The Russian invasion has dampened the notion that bitcoin is a safe haven, analysts, said. In fact, the world’s largest cryptocurrency has behaved more like a risk asset. Since the beginning of the year when the Russia-Ukraine crisis started percolating, bitcoin has lost 22% of its value against the dollar.

Investors have flocked to Treasuries and the U.S. dollar, and even gold, the asset that has been compared to bitcoin.