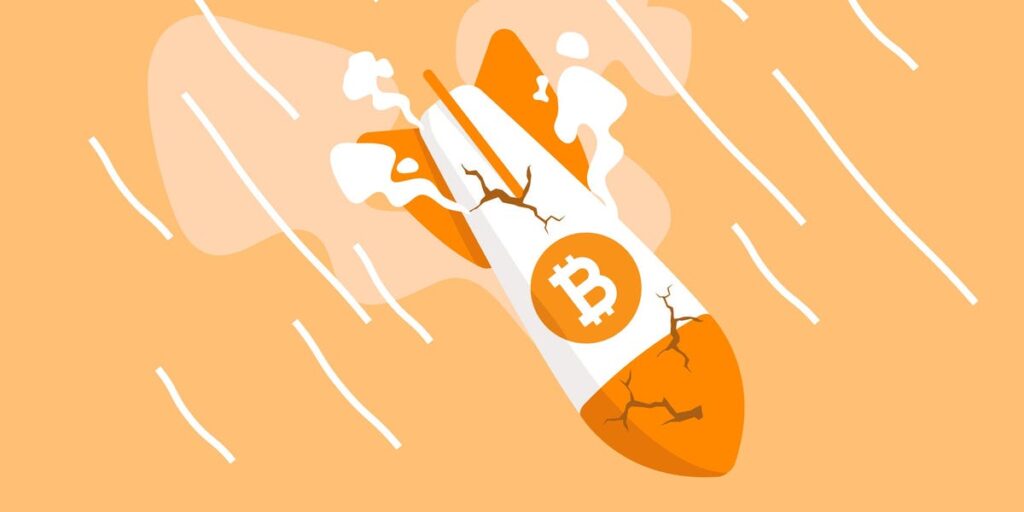 Investors headed into the long weekend in the US with a lot of uncertainties.

On Friday, the risk of a Russian invasion of Ukraine remained high even though US Secretary of State Antony Blinken was scheduled to meet for talks with Russian Foreign Minister Sergei Lavrov next week.

also continues to mount as inflation remains at a 40-year high.

Additionally, more pain could befall some of the hottest trades over the past two years. The S&P 500 and Nasdaq closed Thursday down 2.88% and 2.12%, respectively.

Cryptocurrencies have fared no better. Bitcoin, which fell about 7% on Thursday, was struggling to hang on to the $40,000 level on Friday. Ethereum was down over 6% in the past 24 hours to hover around $2,800, as of midday Friday. The global crypto

retreated to $1.82 trillion, according to CoinMarketCap data.

The double whammy of geopolitical tension and persistent inflation has dimmed crypto market performance because the largest cryptocurrency is the “ultimate risky asset,” according to Edward Moya, senior market analyst for the Americas at OANDA.

“Bitcoin is an unwilling participant in the

that is hitting all risky assets from Russia-Ukraine tensions,” he said in a Friday note. “Bitcoin’s rollercoaster ride won’t end anytime soon, but it could get ugly if Wall Street sees a major selloff if investors begin to expect a prolonged military conflict.”

More pressure on the crypto market could come next week as President Biden is expected to issue an executive order on cryptocurrencies, which could pose a risk to some stablecoins, Moya added.

Biden has also said he will shut down the Nord Stream 2 pipeline if Russia decides to invade.

“This pipeline provides a significant portion of Europe’s natural gas so if it was shut down this could cause oil prices to climb and hence making inflation more of an issue,” Marcus Sotiriou, analyst at the UK-based digital asset broker GlobalBlock, told Insider in an email.

He added: “High inflation is the reason for the Federal Reserve raising rates and has the potential to lead us into a

Yuya Hasegawa, a crypto market analyst at BitBank, agrees that the situation at the Russia-Ukraine border can make or break bitcoin’s price, but more depends on the upcoming inflation data, including the February jobs report and the March CPI data ahead of the FOMC meeting in the same month.

“Depending especially on these inflation data, the worst may be still ahead of us,” he said in a Friday research note, “and even if the price rebounds from the current level in the short term, upside is likely quite limited unless the Russian military shows some signs of retreating.”

Joseph Edwards, head of financial strategy at Solrise Group, concurs that it is “extremely unlikely” that a conflict would not lead to a further decline in crypto prices. He thinks that bitcoin could see new lows at some point this year and break down to the $33,000 support area given the catalysts.

‘Sell the rumor, or don’t sell at all’

Amid rising volatility and uncertainty in financial markets, some investors are taking a wait-and-see approach, and others have tried to act on the adage “buy the rumor, sell the news.”

In Edwards’ view, the biggest thing for investors to avoid would be to try to sell the news.

“Sell the rumor, or don’t sell at all,” he told Insider in an email. “The big thing to remember is that crypto put in a very early bottom compared to most assets in 2020 before bouncing more strongly than them all, and we do tend to think that a potential conflict would represent a short-to-medium-term shock rather than being essentially macro-altering as such.”

Historically, markets tend to sell off into the risk of conflict and stabilize once the conflict starts, Fundstrat’s head of research Tom Lee pointed out in a Friday research note.

“If one listens to pundits, many are advising to stay ‘risk-off’ because there is little visibility on the extent of the conflict. But this is not what history suggests,” Lee said in the note.

Another concern would be the impact of any financial sanctions on proof-of-work mining in Russia, which is now the world’s third-largest bitcoin miner, according to Cambridge University data.

However, the footprint of Russia is still relatively limited in global crypto markets, so any disruptions from sanctions should weigh on market sentiment more than the actual structure, Edwards said.