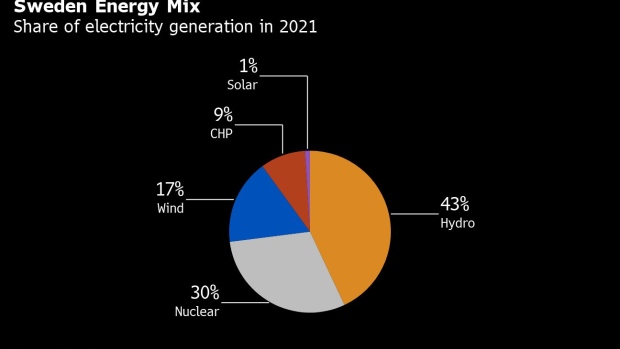 (Bloomberg) — Battery startup Northvolt AB says Sweden should stop wasting state-funded green energy on a local Bitcoin mine, in a sign that competition for access to the country’s renewable power supplies is heating up.

The Goldman Sachs Group Inc.-backed firm — which runs a cell factory in Skelleftea and plans to build another plant in Gothenburg — is a part of a wave of manufacturers eager to decarbonize their assembly lines by tapping Sweden’s hydro and wind power sources.

Access to cheap renewable electricity has already attracted ventures including a green steel startup backed by Spotify Technology SA’s founder Daniel Ek and a producer of hydrogen-based shipping fuel. Yet Northvolt says a Genesis Digital Assets crypto mine in Ortrask should not benefit from state-funded energy-tax incentives because it contributes little to the overall economy and job market.

“Green electricity is the new gold and Sweden is sitting on a goldmine,” Jesper Wigardt, a spokesman for Northvolt, wrote this week in an open letter on LinkedIn. “Unfortunately we are partly giving it away to data centers and Bitcoin mining instead of allocating it to industries that create real value.”

Wigardt says the mine consumes almost a third of the power Northvolt’s Skelleftea plant requires yet provides only a fraction of the jobs. The battery maker plans to hire 1,000 people at Skelleftea this year and in the long term expects to employ as many as 4,000 workers at the site.

Sweden in 2017 extended a tax rebate of about 35 ores ($0.04) per kilowatt-hour — which can add up to millions of dollars per year for large factories — to data centers to attract more investment.

READ MORE: Bitcoin Miners in Nordic Region Get a Boost From Cheap Power

While the country’s financial-supervisory authority and environmental protection agency late last year called for a Europe-wide ban on energy-intensive crypto mining, Sweden’s federal government so far hasn’t signaled it would restrict the practice.

After China banned crypto transactions last year, miners have been searching for new homes for their operations, with several ending up in Kazakhstan, North America and Russia. Sweden had a 1.2% share of Bitcoin mining as of last August, according to the Cambridge Bitcoin Electricity Consumption Index.

Northvolt, with a stated ambition to shift the balance of battery-making power to Europe from Asia, has secured billions of dollars worth of contracts from electric-car manufacturers including BMW AG, Volkswagen AG, Volvo Car AB and Polestar.